After an incident which sent her flying across a hockey pitch, Linda Skelton from York embarked on a journey back to fitness which saw her go from a hospital bed to a medal winners’ podium in just three months.

Linda, 67, is passionate about fitness. An enthusiastic trekker and walker, with Mountain Leader accreditation, she has practiced yoga for over 20 years and is a founder member of the LX Ladies Hockey Club, which is affiliated to England Hockey as a touring side for over 60s players. 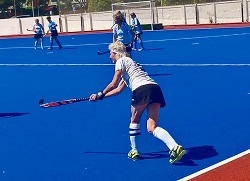 When a tackle sent her flying during a hockey match in early 2017, Linda thought she may have damaged her hip. After a couple of months of physio she was back playing hockey and doing exercise, but she knew things weren’t right as some of her yoga poses were becoming much harder.

“I knew something was wrong, but I couldn’t convince anyone as all they saw was an active 66-year-old who they thought perhaps should be happy with being as fit as I was,” Linda recalled.

Later in the year she had recovered enough to play in the World Grand Masters Euros in Glasgow, with her LX Ladies team finishing second in the over 60s Section.

“We played six matches in nine days so it was quite intense.” 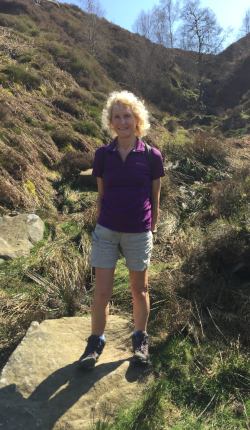 By the end of the hockey season, Linda was really struggling with her fitness and for the first time she could remember she had to give up running. She was also still struggling to persuade the GP there was anything wrong other than the usual aches and pains associated with getting older, so she paid privately for a scan and learned she had severe osteoarthritis in her right hip.

“I knew instantly that I would need a new hip. All of my symptoms had been getting worse over the previous 10 months and I had been getting nowhere with trying to fix them,” said Linda. After her osteopath recommended consultant Mr Jon Conroy at Nuffield Health Leeds Hospital, Linda was determined to get back to a fitness level that would mean she could continue to play hockey.

“Having played in the inaugural World Cup for over 60s, I had hoped to play in the new over 65s competition.  Whilst I’d had to withdraw from England selection, our LX Ladies were also forming an over 65s team so I still wanted to play in this first competition, but it was in Barcelona in June 2018 and my initial consultation with Mr Conroy was just a few months before it in February.

“We made a deal. He said that if I let him fix my hip it would be possible for me to play hockey in June. I was so relieved that the problems I had been having, and which no-one else seemed to think were a concern, could be fixed. Mr Conroy filled me with confidence and gave me the incentive I needed.”

“I am a determined lady and when Jon told me I could play hockey again I was ecstatic! I felt very positive about the future and couldn’t wait for the operation.”

Nuffield Health Leeds Hospital was the first hospital in the North of England to offer Mako robotic-arm assisted surgery for total hip replacement. The system supports the consultant throughout the orthopaedic surgery and has been shown to be more accurate, as well as offering greater improvement in patient function when compared with manual surgery.

Consultant Orthopaedic Surgeon Mr Jon Conroy explained: “Linda is a motivated and fit patient so I would expect her to recover well after hip replacement. The Mako robotic assistance during the surgery helps with planning and correct placement of the implants. In my experience the balance of the hip is improved by choosing the correct size, the correct position and leg length correction. With the choice of low wearing implants designed for younger patients it gives the surgeon confidence to encourage a safe fast track return to activities.”

Four short weeks after her operation in Leeds, Linda was umpiring at a hockey tournament and stunning her friends and teammates with her determination and return to fitness. 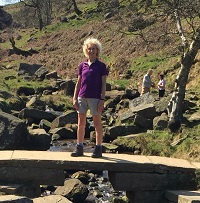 “I know I had the advantage of being strong and fit so was probably in a better position than most for a quick recovery, but even I was surprised by the things I could do at home so soon after the operation, including the ironing on the first day!”

In June, Linda travelled with the rest of the LX Ladies Club to Barcelona to play in the Grand Masters Hockey World Cup. Again, with six matches in nine days, the heat and the competition proved challenging, and playing in the midfield Linda helped her team of over 65s to win silver medals.

“I remember being told that the spectators who found out I’d had a hip replacement three months before the competition were amazed! I was so thrilled as the surgery had given me my life back.”

“After the World Cup I knew that Jon had been right! I found I could get my knee back up to my chin during yoga which had become a real pleasure again. I was getting stronger and was successfully working at getting back to my fitness level of a couple of years ago.” 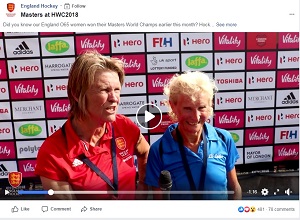