Rainforest Adventure is highlight of Assistant Head Teacher's journey back to fitness after hip replacement.

At 40, Wakefield Girls’ High School assistant headteacher Joanna Rhodes was facing the prospect of not being able to tie her shoelaces for the rest of her life.

She had bought herself a special adjustable bed so she could find a comfortable position for sleeping, and she couldn’t cycle or ride as she couldn’t lift her knee.“The pain was horrible. But it wasn’t as bad as the restriction in movement, which I was desperate to change,” says Joanna. 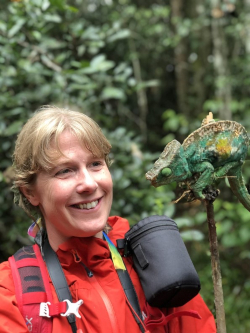 Joanna had severe osteoarthritis of the hip and because of Joanna’s hip shape, it contributed to the early onset at such a young age. The final straw came during a family holiday in Dubai where Joanna, her husband Trevor and two boys Gabriel and Timmy had booked a camel ride.

“I don’t know what I’d been thinking when we booked the camel ride as I couldn’t even ride a bike! I had to sit astride the camel and the pain was so bad it completely ruined that part of the holiday,” she recalls.

Joanna’s enforced retirement from activities she loved was particularly hard to bear. During her time at university in the late nineties she had twice won blades as part of the rowing team at St Catherine’s College, Oxford and been awarded a Full Blue as part of the Oxford University Women’s Fencing Team. Then between 2004 and 2011 sport had taken a back seat when her children arrived, but when she did try to get back to full fitness, she discovered her left hip was quite painful.

“It really wasn’t possible to resume any of the competitive sport I had enjoyed at a younger age. Even staying fit was difficult as progressively I couldn’t row or run. By 2016 I could no longer ride a bike as I didn’t have sufficient range of movement. By 2018 I was having difficulty reaching my shoelaces to tie them. I realised something needed to be done.” 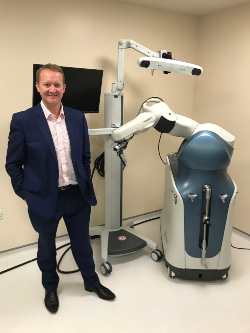 Joanna’s GP referred her to a specialist, where she was shocked to discover that the only solution on offer to her was surgery. “I had thought perhaps an injection would fix me, but after X-rays and an MRI I was horrified to learn that there was very little to be done apart from replacing my hip.”

Joanna started to research the operation and was particularly keen to find a consultant with a proven track record and a positive approach to younger adults with joint problems. “Reading about Mr Jon Conroy on the website reassured me, and the case studies, especially from younger people like me made me realise I didn’t have to wait until later life to feel better. I was particularly impressed with Jon’s expertise in engineering and the fact he is at the forefront of innovation in these surgeries.

“I was keen to take advantage of the most cutting-edge technology and intrigued by the robotic assisted hip replacement.” Thanks to her husband’s private health insurance, Joanna was able to see Mr Conroy at Nuffield Health Leeds Hospital, the first hospital between London and Edinburgh to offer robotic-arm assisted surgery for a range of orthopaedic treatments. Joanna was immediately impressed by both the consultant and the facilities.

“He reassured me that my quality of life would be much better after surgery; my movement would return and the pain would go. His certainty and confidence helped me to make a quick decision to go for the replacement.”

Consultant Orthopaedic Surgeon Mr Jon Conroy explained: “Hip replacement is a successful procedure in most patients. It allows patients to return to previous activities as well as improving pain. In my young or active patients, I recommend robotic assisted surgery as the position of the implant is so crucial to its long term outcome. Accurate pre-operative planning with 3D CT scan, accurate robotic positioning and high performance implants give me the confidence to allow patients to return to high activity levels.” 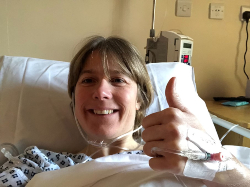 Two days after her 41st birthday and a small family celebration, Joanna underwent the surgery. “I stayed awake throughout, listening to an audio book ‘Harry Potter and the Goblet of Fire’. The operation wasn’t as bad as I thought it would be.”

After a couple of days in hospital where everyone was very supportive, Joanna began her recovery. “Mr Conroy had said that my recovery was very much in my hands. It was up to me how quickly I would be able to do what I wanted and with the support of the physio at the Nuffield gym I soon found out how much I could do without causing any damage.”

And what a recovery! One year on from her operation, Joanna had managed to cycle a total of 1,941km with an elevation profile almost three times the height of Everest! Her journey back to fitness started with a 2,500m Swimathon for Marie Curie Cancer Care three months after the operation.

In the April, she bought a bike; her first since university, and was soon making regular visits to the Brownlee Centre in Leeds to ride the circuit with her sons Gabriel and Timmy and her sister Louisa. But perhaps Joanna’s biggest challenge was a trip she’d signed up for two years before her operation, when she’d volunteered to take part in an expedition to Madagascar in July 2019 with a group from Wakefield Girls’ High School.

During a 20-mile training hike for the expedition in April when it rained for three days, Joanna found herself thinking “I’m insane! What am I doing!?” She had gone from needing to sleep in an adjustable bed and suffering incredible pain, to hiking across the Dales in wet weather and sleeping on the floor in a saturated tent! 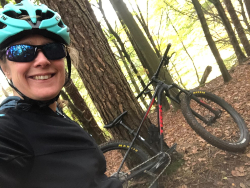 But Joanna had to prove her fitness to go. So, she continued pushing herself, cycling more challenging routes including Holme Moss and the 118km Great Yorkshire Bike Ride with her sister Louisa in June, raising over £300 for charity in the process.

In July, Joanna was over the moon to be on the flight to Madagascar for the expedition of a lifetime. “When I got on the plane the only thing I was worried about was my students getting sick! I was just so pleased the pain had gone and I’d got my movement back. I felt a new sense of invincibility and a real sense of confidence. My limitations had gone and I was no longer dependent on anyone else.

“I don’t think I would have been able to cope if I hadn’t had the surgery. We hiked across the desert and in the rainforest, canoeing down Madagascar’s longest river and camping on the sandbanks. The wildlife was amazing. When we found a pygmy chameleon smaller than my little finger I thought I was going to be sick I was so excited! It took my hero David Attenborough three trips to find one!”

Back in the UK, Joanna’s summer holiday challenges continued with a visit to the Manchester Velodrome where a minimum speed is required to stay on the steeply banked track, and a trek up Snowdon’s Pyg Track and more road cycling training for the UCI Road World Championship Sportive. 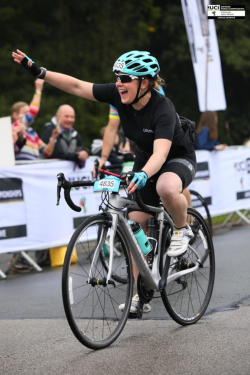 “It’s not often a World Championship comes to your neck of the woods, so when we found out it was coming to Harrogate we just had to sign up to take part!”

On 22 September, Joanna and her sister Louisa took part in the race which attracted a record-breaking audience. The weather was extremely wet. "My shoes filled with rain and there were people slipping off and aquaplaning. It was tough.”

“Obviously needing a replacement at such a young age did concern me and I initially wondered if I should leave it longer before having surgery. Mr Conroy made me realise that it was better to have a life I could enjoy pain-free now. I’ve deliberately chosen low-impact sports as I don’t want to reduce the life of the joint. I’ve tried not to take risks and I’ve had amazing support from the Nuffield physios and my family. Who knows, I might need the other hip replacing in the future but I wouldn’t hesitate to just get on with it!”


Back to The Leeds Blog.