Overview
Back to top
Cancer Women's Health
Ovarian cancer is notoriously difficult to diagnose, but there are symptoms to watch out for.

Ovarian cancer, or cancer of the ovaries, is the sixth most common type of cancer in women. But as its symptoms are easily confused with other conditions, by the time many women are diagnosed it's too late for effective treatment. As a result it's the leading cause of death from gynaecological cancer in the UK. So it's important to arm yourself with an understanding of common signs, and seek medical advice if you experience one or more of these.

What is ovarian cancer?

Cancer is a disease of our cells. Sometimes cells malfunction and become abnormal. They continue dividing to make more abnormal cells which can form a lump or tumour. There are many different types of ovarian cancer of which the epithelial type, relating to the tissue that forms the outside of the organs, is the most common. Sometimes ovarian tumours may arise from other areas like breast, gut, blood system, uterus or the cervix and this is called secondary tumours. Ovarian cancer may spread to the pelvis, glands around the main arteries or the lining that covers the pelvis and abdomen called the peritoneum.

Ovarian cancer mainly affects women who have been through the menopause over the age of 50, but it can sometimes affect younger women.

7 symptoms which could indicate ovarian cancer 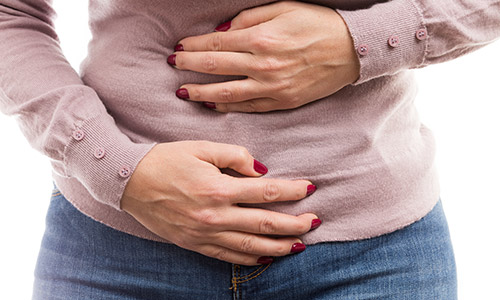 These symptoms are not unique to ovarian cancer: many are similar to symptoms of other common conditions and the majority of patients experiencing these symptoms do not have ovarian cancer. However, to maximise the chance of early diagnosis, you should speak to your doctor, especially if you're over the age of 50, if you have any of these symptoms on a persistent or frequent basis – particularly more than 12 times per month. There’s no harm in speaking to your doctor earlier if you are worried.

Your doctor will investigate further, conducting a blood test that looks for raised levels of the CA125 protein, however raised levels of this protein can also indicate less serious conditions such as benign cysts, pregnancy, endometriosis, fibroids and pelvic inflammatory disease. An internal examination and an ultrasound scan may be necessary.

Early detection makes ovarian cancer easier to treat. Seeing your doctor could save your life. Even if you're nervous or worried about making an appointment, don't put it off. Denying your worries or symptoms is unlikely to result in them going away.

Likewise, don’t let embarrassment put you off. Anything you share with your GP is confidential, and doctors routinely discuss intimate issues as part of their job.

The good news is that most people with these symptoms don’t have ovarian cancer.