Overview
Back to top
Fitness
It takes years of hard work and incredible talent for tennis players to earn a place at Wimbledon. The famous grass courts are reserved for athletes at the top of their game, so it’s only right that a pair of 10-year-olds from the Nuffield Health Tennis Academy in Hull have been invited to take centre stage.

When Sam Loughton was just a toddler, he hit his Dad in the head with a tennis ball. It is one of his earliest memories. Millie Skelton remembers struggling to hit a ball at all during her first tennis lessons. Over and over again she swung and missed until finally, she sent the ball flying through the air in an exhilarating rush of power.

“Tennis taught me to stick with it," she says. "You have to be determined.” 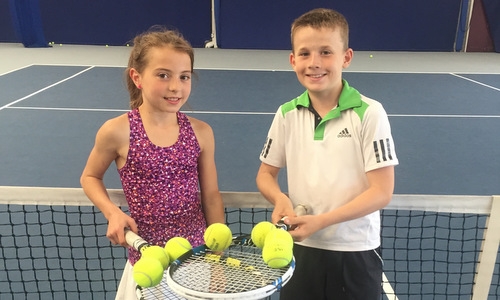 Both did stick with it and are now regional champions in their age group. It was after dominating the North Region circuit over the winter season that they were invited to take part the oldest and arguably most prestigious ‘Grand Slam’ event in the world.

“When my parents told me I was going to Wimbledon I was amazed. They pick juniors every year but I didn’t know that until I was picked. I never expected it,” says Sam.

The pair will get a behind-the-scenes tour where they hope to spot their favourite players. Millie would love to see Maria Sharapova while Sam wants to meet his hero, Rafael Nadal.

But his loyalties lie closer to home: “I love Rafa but I still support Andy Murray”.

They’ll also get a chance to showcase their skills in front of the crowds on Wimbledon's iconic grass courts. The pair will perform a demonstration match on Court 7 on Saturday July 4th, shortly before the pros step out.

“I’ve only ever played on artificial courts. Playing on real grass will be a completely new experience for me,” says Millie.

The young stars train at the Nuffield Health Tennis Academy in Hull. Nuffield Health has run the Lawn Tennis Association (LTA) accredited academy since 2007 and boasts no less than ten members between the ages of 10 and 16 who represent Yorkshire at a national level.

“What really sets it apart from other clubs is the willingness of our coaches to go that extra mile - putting in additional hours watching the kids compete, planning tournaments and helping make sure juniors eat well and get enough sleep.”

Millie likes being pushed to the “Nuffield level”.

“The coaches teach you to do cool moves like back-hand slices, smashes and volleys. I was never taught anything but the basics before I came to Nuffield.”

For Sam, having access to indoor courts and the attached Nuffield Health Fitness and Wellbeing Centre means he can keep up his routine year round.

“You have to do a lot of strength and conditioning work otherwise you get injured. Having access to the gym is really helpful.”

Jenny says the coaching team noticed Sam and Millie had extra potential when they were both around seven years old: “that’s when kids really start to show their athletic ability”.

Talent is only the beginning. The kids spend 10 hours a week training. But as Sam learned, the key to success is a positive attitude.

“I was losing games and giving up. It really upset me, but my coach reminded me that it’s not the end of the world. I learnt to get over it and enjoy myself. That’s why I’m winning and why I’m going to Wimbledon.”

The 10-year-olds are hopeful that this is just the first of many ‘Grand Slam’ appearances.

“I love teaching others,” says Millie, “I want to be a coach. But to be a professional player – that would mean the world to me.”

Dedication: What it takes to be a tennis champion with Paul Jubb