Overview
Back to top
Cancer Women's Health Patient story
Joanne Taylor survived breast cancer, but fear and anxiety stripped away her confidence. Now, after a remarkable physical and emotional recovery – she’s back in control and dedicating her life to helping women living with cancer.

Joanne’s last carefree night was in the summer of 2011. She spent a night out on the town, had a few drinks with friends and came home late. The next morning, as Joanne shared a cuppa with her mother-in-law and a friend who happened to work at a breast clinic, she folded her arms and felt a hard lump tucked in near her left armpit. That was the moment her life changed course forever. She was 42.

After two weeks waiting for the results of a biopsy Joanne was diagnosed with breast cancer. Further tests revealed it was invasive, aggressive grade 3 breast cancer. And it was growing and spreading at an alarming rate.

Joanne endured six months of chemotherapy and with radiotherapy treatment still to come, she and her surgeon discussed the prospect of mastectomy. Initially, they agreed on removal of the left breast only, but as depression and anxiety set in Joanne made a choice to have both breasts removed and have a double breast reconstruction.

Her surgeon was reluctant to remove healthy breast tissue, but given Joanne’s vulnerable state, they agreed to go ahead as long as Joanne went to counselling to prepare. It was during a session with the psychologist that Joanne broke down, finally making the choice to keep her healthy breast.

“That was my first step to thinking positive, up until then I’d only had negative thoughts.”

“That was my first step to thinking positive, up until then I’d only had negative thoughts,” Joanne says. 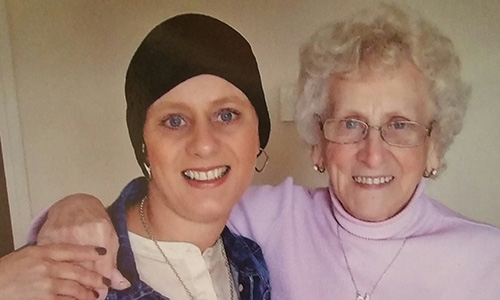 Chemo and the mastectomy had dramatically changed Joanne’s body. She joined Nuffield Health Chesterfield Gym to try and restore her confidence. Wearing a prosthetic breast, she began swimming at the Centre’s pool to calm down and rebuild her fitness.

She then went through 20 bouts of radiotherapy (the maximum allowed) before being given the all clear. But the relief and elation was quickly replaced by post-traumatic stress disorder. Joanne stopped visiting the gym as her life – so recently affirmed – began cruelly falling apart again.

With counselling and the support of her husband and mother – Joanne found the strength to start over. It began with getting back to the gym.

“The manager, John, and all the staff at Nuffield Health Chesterfield Gym were all so supportive. I feel like I have a new family unit there,” she says.

Now, with a personal trainer, Joanne swims up to 30 lengths – and is taking pride in her appearance and herself once again.

Joanne uses her rediscovered confidence to help other women like her who are living with breast cancer. She’s now run several successful fundraising initiatives with Nuffield Health Chesterfield Gym and other organisations, raising thousands of pounds for cancer research and local treatment facilities. 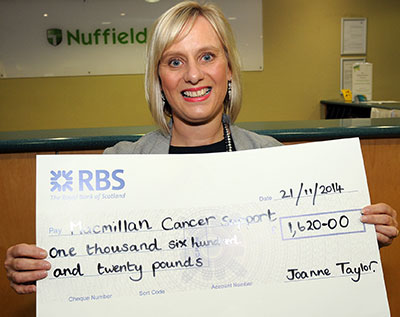 “This is what I want to do with my life now. I want women to know there’s light at the end of the tunnel. Life can be good again after breast cancer.”

Have questions for Joanne? Join our Breast Cancer Live Q & A on Tuesday 6 October.