These oldest world record holders will put your fitness to shame

Overview
Back to top
Fitness Lifestyle Management
You’re never too old to exercise, just look at these Guinness World Record holders for inspiration.

We can all be guilty of letting our fitness slide, but age shouldn’t be an excuse. As we get older our need to keep fit doesn’t drop; it’s about staying healthy and feeling great, after all.

So in case you’re in a bit of a fitness lull, we’ve collated this list of some of the oldest Guinness World Record holders, to provide a bit of a nudge.

1. Oldest woman to run a marathon

One of the greatest challenges on Earth. Pah! Japanese climber Yuichiro Miura doesn’t care – he has been the oldest person to reach the summit three times. The last time he did it he was 80 years and 223 days old.

3. Oldest person to perform a backflip

Walter Liesner from Germany was 94 years and 268 days old when he performed a backflip into a swimming pool on 9 October 2007. A former gymnast, he didn’t let his age stand in his way, he just gave it the flip.

Doris Long took up abseiling when she was 85 and has completed 16 descents. She was an incredible 101 years and 55 days old on her last abseil in 2015 – a trip down the Spinnaker Tower to raise money for her local hospice.

5. Oldest person to row an ocean

Rowing is one of the best full-body workouts you can do – so think how fit Thomas Butscher must have been to row across an entire ocean. In 2011 he crossed the Atlantic Ocean at 67 years and 210 days old as part of a 16-person crew.

Britain sure does have talent in world record holder Sarah (Paddy) Jones, who is known for her salsa stint on the ITV show in 2014. She was first recognised as the world’s oldest acrobatic salsa dancer in 2009 and still holds the record now at 81 years old.

7. Oldest person to trek to the South Pole unsupported

Braving some of the worst conditions in the world, Brit Simon Murray traversed approximately 683 miles to reach the South Pole, unsupported. He was 63 years and 309 days old when he completed the trek in 2004.

97-year-old Tao Porchon-Lynch teaches yoga to 400 students in New York. She can do the Gandha Bherundasana with the best of them and is also a dancer, a writer and a lecturer. 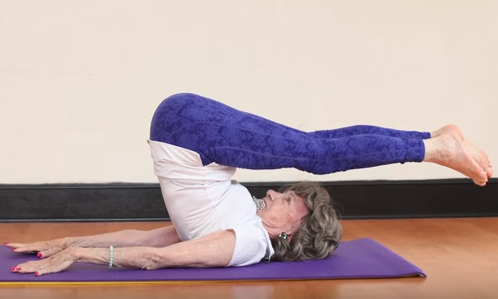 Tao says: "I believe that we can always reach just a little bit further. I'm inspired to bring yoga into others' lives along with helping people unearth new talents".

5 of the best exercise classes for the over 55s

The importance of exercise as we age