Overview
Back to top
Healthy Weight Lifestyle Management Patient story
Simon has transformed from an unhealthy and overweight Corporate Insurance Advisor to a triathlete and coach following a Nuffield Health Assessment that revealed startling results.

In 2009 Corporate Insurance Advisor Simon was living a high-flying life, with all of the excesses that went with it. His job required him to court clients with restaurant dinners and afternoon drinking sessions, which he combined with a heavy smoking habit and working long hours. It all took its toll.

Simon wasn’t aware how much it had affected him until he was offered a health assessment through his work. He discovered his weight had crept up to 20 stone and that according to his BMI score, he was morbidly obese. 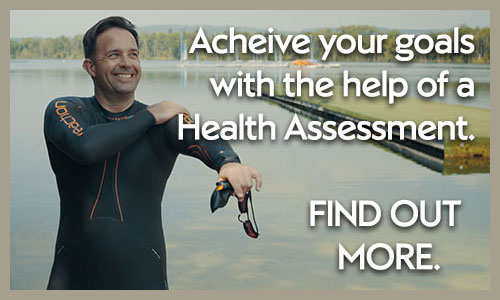 This came as a shock to Simon - despite his unhealthy lifestyle, he hadn’t expected to be putting his life in danger. Being morbidly obese meant that he was at risk of osteoarthritis, heart disease, stroke and diabetes. “It really drew a line in the sand for me,” says Simon. “I’d always just looked at other people and thought, ‘Well I’m not as bad as that guy’. Once I got my health assessment I stopped comparing myself to others and started setting goals for myself.”

Simon didn’t waste any time turning his life around after talking through his next steps with the Nuffield Health doctor. They broke down his health targets down into small chunks, starting with giving up the cigarettes, giving him the best chance to lose weight through exercise unrestricted by the effects of smoking on his lungs.

Although a gym member, Simon needed a motivational goal to work towards, so he entered his first triathlon. Despite having trained for some months, Simon was still very overweight when it came to race day, but he carried on regardless. “How the wheels didn’t buckle I don’t know,” he says. But he made it to the end, raising money for a local hospice along the way, and had found a passion that would change his life.

Simon immediately entered another triathlon, and then another, shedding pounds and growing in confidence along the way.

Come 2013 Simon was competing in triathlons regularly and decided to take things to the next level. Filling a gap in his local area of Louth, North Lincolnshire, he set up a triathlon club with two of his friends. The Triathlon Club now has over 200 athletes of all abilities and ages. As Chairman of the club, Simon secured over £5000 of funding for equipment and training for more coaches, he became a British Triathlete Federation coach himself and he successfully completed his first Half Ironman in September 2015. Louth also successfully hosted the first ever triathlon in September 2014 meaning others could use triathlon as a goal to work towards.

Simon has transformed not only his body, losing 5 stone in as many years, but his entire life. The experience made Simon question his career path:

“I decided I really wanted to work for an organisation that stood for all that the health and lifestyle values that I’d come to believe. So I did my research and approached Nuffield Health.” And it worked. Simon quit his job in the insurance sector and is now a successful Business Development Manager for Nuffield Health’s primary and preventative health division.

How a health assessment can help you live your healthiest life

What to bring to a triathlon