How long does it take to recover from varicose vein surgery?

Overview
Back to top
Skin Women's Health
With no waiting lists, Wendy was able to get rapid treatment for her varicose veins. Follow her journey with this interactive timeline and see just how quickly she was back to her best.

As Wendy chooses her outfit for her birthday dinner, she realises with some shock that she's not worn a dress on her birthday for the last seven years. In fact, she's stopped wearing them altogether on account of unsightly varicose veins. 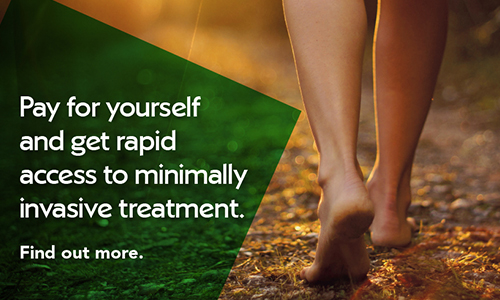 A month later, Wendy notices increased aches and pains in her legs after riding. Spending time on the horses becomes less enjoyable.

A friend tells Wendy about an open event at her local Nuffield Health hospital discussing varicose veins. She books herself in and meets Consultant Vascular Surgeon, Mr Simon Hobbs at the event.

Wendy arranges to meet Mr Simon Hobbs again, after making an appointment at the open event. They discuss the options and opt to treat both legs with radiofrequency ablation. Wendy decides to pay for herself and books a convenient date after the holiday season to have treatment.

Wendy returns to have her procedure. She has local anaesthetic and the treatment is completed within two hours. Wendy is given compression stockings to wear and is able to walk out of the treatment room and go home the same afternoon.

One week after her procedure, Wendy is able to discard the compression stockings she was wearing to prevent DVT and gets back on the horse.

A few months later at her son's engagement party, Wendy wears a stunning knee length skirt and she couldn't be happier.