How family inspired Jenny to become a fit Granny

Niki May Young Senior Content Producer for fitness and wellbeing
At 55 years old Jenny has begun a new fitness journey, inspired by her love for her family.

“This photo was taken a place called the Rumbling Bridge at Dunkeld in Perthshire. It overlooks the waterfalls. We were sitting on a rock near the falls on a sunny day. It was something we used to do quite regularly,” Jenny reminisces about her time as a young mother in Scotland. 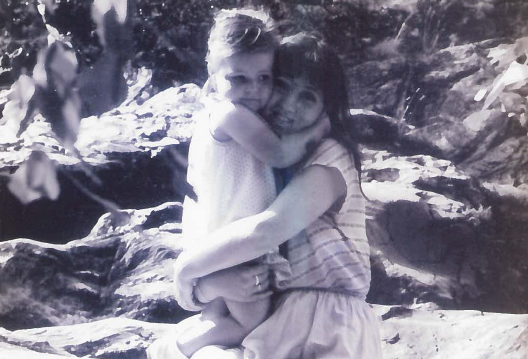 “I was settled, I had children, I was healthy - it was a good, uncomplicated and happy time.” Over the years though, Jenny says, she began to her health and fitness for granted.

“I don’t think many people did the gym back then, in the early 80s it hadn’t become big yet. As the 80s wore on I had friends who got heavily into the gym, but I was too busy with the kids.” Jenny’s office-based career left her living an increasingly sedentary life sitting still for up to 10 hours day in, day out. But working on the care line of a large diabetes charity, Jenny learnt first-hand how a lack of fitness related to the condition. She knew it was important to take your health in your own hands.

“I want to get fit again because I’m 55 now and I’m not fit – in fact I’m a bit overweight. I can’t take my health for granted any more so I need to take charge. I just want to feel a bit healthier and stay that way.”

Now retired and living in Twickenham, London Jenny is busy being a mother to three of her own children, step mother to a further three and Granny to five grandchildren – a tally that is set to grow to seven in the New Year.

It’s her family that inspired her to turn things around.

“Having grandchildren is a big eye opener because you realise how much fun they are and how much they do need grandparents. I just want to be around for as long as I can really. ”

“Both my parents died when I was 24 so they never knew the grandchildren. I want to be around while they still need me.”

Jenny was introduced to Nuffied Health in Twickenham through its pool. After taking her granddaughter Penelope to swim there for several months, Jenny decided to give the gym a go herself.

“I never would have joined if I hadn’t become familiar with the environment. Everybody is really friendly and you realise it’s not just gym bodies and young people. I wasn’t embarrassed to go at all,” she beams.

Jenny has begun her fitness journey where she is most comfortable – in the swimming pool. Going forward, she says, she would like to start taking on some of the group exercise classes.

“I’ve seen a lot of ladies congregating in the pool for the Swim Fit class which looks like a good place for me to start,” she says, “But it’s only a starter. I’d like to get involved in the other classes and take it from there.”

So how does Jenny feel now that she’s started to take action for her fitness? “I feel good that I’ve joined and I can certainly swim a lot more than I was able to do before so something’s improved. I still take Penelope and sometimes my husband and I take my grandsons as well because the under 5’s get in to the pool for free, so we’re able to share these moments with them as well.” Having just welcomed another granddaughter Alexandra into the family Jenny says she hopes to do the same with her soon too.

5 of the best exercise classes for the over 55s