How Marc fought his way back from depression

Overview
Back to top
Mental Health Support Fitness Lifestyle Management Men's Health Patient story
At age 19, Marc Rodwell was morbidly obese and suffering from a raft of mental health issues. His health was so poor he was warned he might not live to see his 25th birthday. But with grim determination and the unfaltering support of his father, Marc clawed his way back from the brink.

The man leading the Halloween ‘Spooky Spin’ class is fit. He’s confident. He’s a qualified PT. The mask he wears for the event cuts a possessed, wild-eyed stare. Thin, beaten skin hangs off his skull and scraggly, patchwork hair stands on end - like a man dragged through hell backwards. And under that mask – Marc Rodwell is grinning ear to ear.

There was a time when Marc felt more like the mask than the man. Tall and obese throughout his childhood, Marc was constantly under attack. 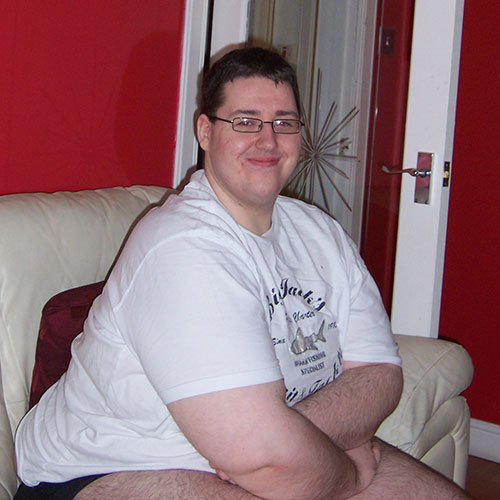 “It started off with name calling. They used to call me ‘Fat boy’. As I got older sometimes there would be kids waiting for me after school. They pushed me over, kicked me,” remembers Marc.

For years Marc endured bullying that drove his confidence into the ground. His weight ballooned and by the time Marc was in his late teens he was pushing 40 stone. As depression, agoraphobia and anxiety crept in – Marc shut the door on the world.

“I told both my mum and dad that I thought the world would be better off without me.”

His closest companion was his mother. But when Marc was 18 she suffered a crippling heart attack that left her bed ridden and in and out of hospital for years.

“Dad was never really around before Mum became sick,” says Marc. “He worked a lot and we didn't get along well. Mum would wrap me up in cotton wool but dad wanted me to get on with things.”

But Marc didn't want to get on with things. He’d given up caring about his health and his future.

“I told both my mum and dad that I thought the world would be better off without me.”

At age 19, Marc’s obesity had contributed to a bad case of sciatica, and he was forced to see a GP. He’d expected pain relief but instead he was served a hard truth.

“The doctor told me I’d be dead by 25 if I didn't do something about my health,” says Marc.

“At first I was angry. I thought, ‘How dare he? He can’t treat me this way, he’s supposed to help.’ It felt like I was being bullied again.”

As reality began to sink in, Marc had to think hard about what he had said to his parents. Did he really want to give up on life?

The Nuffield Health Fitness & Wellbeing Gym East Kilbride was just over 10 minutes from Marc’s home. But before that appointment there was “no way in hell” he’d ever go there.

But after the doctor's reality check, Marc decided to take action.He had always had a competitive streak but his weight had prevented him from physical competition. This time, though, Marc's determination to change won through.

“Just being there for someone going through depression is worth so much.”

“I went in for two hours at a time and smashed it out on the treadmill or the bikes listening to music on my headphones. I didn't make eye contact or talk to anyone.

“The first six months were incredibly difficult but when I started seeing results I just kept pushing.”

Marc’s weight rapidly dropped away, leaving him with excess skin all over his body.

“It was really harsh to realise my hard work wasn't going to be enough.”

But when he shared his story with popular television programme, Embarrassing Bodies, they were keen to help out.

“They were really surprised at the speed at which I’d lost the weight. They rang and signed me on right away,” says Marc.

“Dad drove me to all my treatments. He was behind me every step of the way, pushing me to keep going.”

During filming, Marc underwent body contouring surgery to improve the appearance of his skin.

“I woke from surgery thinking, ‘This is it. This is the next chapter’. I started working towards a career in health and fitness."

He started a personal training course and soon applied for a front-of-house job at Nuffield Health Fitness & Wellbeing Gym East Kilbride where his transformation had begun.

Marc got the job and is now a qualified level 3 personal trainer.

“The PT course has really helped me to better understand what a healthy workout routine looks like for me. My aim is to move onto the gym floor to help others with their health goals.”

In the meantime, Marc is running group spin classes on a regular basis – on top of his day job.

“I nearly pulled out of the first spin class I’d been asked to lead. I couldn't face all those people, I felt sick.

“But as I sat on the bike looking at my class my manager and a few of my colleagues were stood at the back, silently egging me on.

“I still have anxiety and probably will do for the rest of my life. With a little medication and mindfulness I've learnt to control it.” 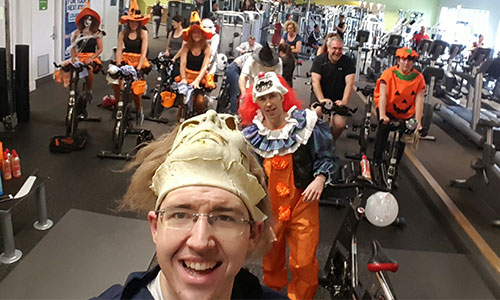 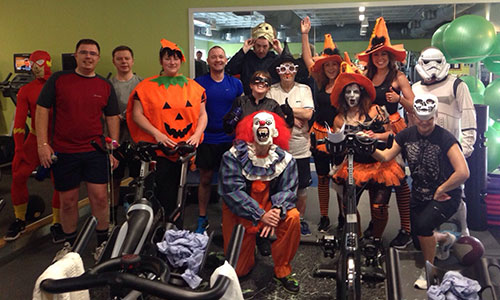 From a man terrified of open spaces, a man who dreaded human contact and who believed he had nothing to offer the world, Marc is now a confident young leader at the head of the spin class. A man working towards an ever brighter future for himself. And every Thursday night, Marc’s Dad – his infallible supporter and never before a gym-goer - is at the front of the class.

“I think he’s incredibly proud of me. I owe him so much really.

“We talked a lot. We argued. I said some unforgivable things - but he stuck with me through the tough parts.

“Just being there for someone going through depression is worth so much. Talking, even the arguing, helped me get through the darkest time."

If you or someone you know is struggling with mental health issues visit the Movember Mental Health page for advice and support.