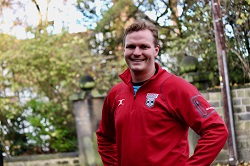 Eight weeks after 29-year-old Jimmy had a total hip replacement, he was back at work and looking forward to a skiing trip – his favourite type of holiday!

At the start of 2018 after five long years struggling with arthritic pain and unable to live the active lifestyle he loved, Jimmy made the decision to have the operation at Nuffield Health Leeds Hospital after he heard about the Mako robot assisted surgery system in use there.

“Despite being told by some people that I should put off having a hip replacement for as long as possible because of my age, I knew that modern technology and new procedures were available which would give me the best chance of a better outcome,” he said.

Jimmy works as a technical sales engineer in the automotive industry and he just weeks after his operation he started a staged return to work. More importantly, he was back at his local gym taking part in spinning classes. 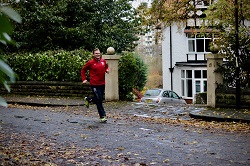 “I was 100 per cent happy with my recovery after the operation. I wasn’t limping and the pain that was in my hip had disappeared. Now I don’t get any residual pain after exercising and the weight is beginning to come off since returning to the gym. I can’t wait to get back to sports, particularly football and perhaps even skiing this season!”

Jimmy was originally referred to specialist hip surgeon Mr Jon Conroy five years ago by the club physio at Keighley RUFC where he played in the first team. A fairly minor injury on the pitch signalled the start of his long and painful journey to the Nuffield Health Leeds Hospital where he had the life-changing surgery in July.

“During a match I damaged my hip, and felt a burst of pain. But it seemed to get better over time so I carried on playing. Eventually it would get to the point where I would have pain for days after a match or training so I went to see Mr Conroy. We opted for cortisone injections which worked really well for a couple of years but I think I knew it wasn’t a long term solution.

“I swapped rugby for football until another injury forced me to give that up too. I started running and this made my hip worse again and I’d be limping for days after exercising. About 18 months ago I found out my cartilage had completely worn away and the cortisone injections didn’t seem to be working at all. It got so bad on a family holiday that I was struggling to walk more than 50 to 100 metres. 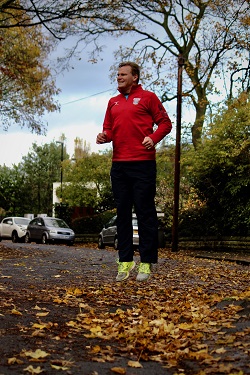 “I decided enough was enough. As Mr Conroy said, these should be the best years of my life, why was I living them in pain? I’d heard about the Mako robot-assisted surgery and how it improved the accuracy of the procedure so I decided to go ahead as soon as the World Cup was over.”

Jimmy’s consultant orthopaedic surgeon, Mr Jon Conroy says: “Hip replacement in patients under 30 years old is unusual but the numbers having surgery is growing. This is in part due to advances in technology giving confidence that current hips will last longer than older designs despite increased demands put on them by a young active population. The national joint registry reports more than 95% of patients younger than 55 years will still have their hip replacement after 13 years.”

“I’m not naïve enough to think that this new hip will last the rest of my life. It could last anything from 15 to 25 years. But it was more important for me to have a good working hip now than when I’m 65. I wanted the pain to go and to get back to normal so it was better to just get on with it rather than waiting any longer,” said Jimmy.

Mr Conroy was the first to perform Mako robotic-assisted hip replacement in the North of England in 2017 at the Nuffield Health Leeds Hospital. Alongside his medical training, he also has a master’s degree in Mechanical Engineering from Leeds University and is part of an American design team developing hip replacements of the future.

Mr Conroy said: “Jimmy is an unusual but increasingly seen case of a young person whose life is affected by arthritis. At the prime time of his life he was only able to walk short distances, his work was affected and he was unable to participate in any sport. It is always sensible to try alternatives before surgery but in Jimmy’s case non operative treatment was unsuccessful and his quality of life poor. 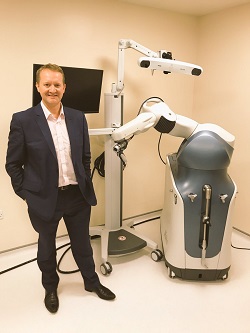 “As an experienced hip surgeon I see many young patients whom have struggled for many years with severe arthritis and after hip replacement wish they had chosen the option earlier. My interest in design of new hip technologies has given me confidence in the new products we implant and importantly how accurately they are implanted. Jimmy had a titanium hip with ceramic on highly crossed linked polyethylene bearing. We choose this latest technology of titanium for younger or active patients to reduce wear. This links with the optimal robot positioning of the hip to reduce wear also. Combined with the accuracy of the robotic procedure we would expect lower wear rates than traditionally seen benefitting the younger patient. I’m delighted we can offer patients at the Leeds Nuffield access to cutting edge technology on a par with any hospital in the world.”