Rheumatoid arthritis had left Leigh Foster, 39, from Middleton in Leeds with a painful right knee, permanently bent at a 45-degree angle which severely limited her activities.

Instead of enjoying an active social life, Leigh spent her weekends resting after a busy week at work. If she was tempted to venture out, the pain she suffered as a consequence was “horrendous”.

Now, after having a knee replacement at Nuffield Health Leeds Hospital, Leigh is enjoying the new lease of life the surgery has given her as she contemplates a milestone birthday later this year. 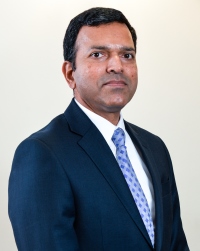 Rheumatoid arthritis, an autoimmune disease that causes inflammation, pain and swelling, affects 25 million people around the world.  It’s the second most common form of arthritis (after osteoarthritis which mainly affects older people) and affects three times as many women as men. This usually comes on in younger people, and its origin is unknown.

Leigh, who works at Asda head office in Leeds, suffered terrible pain over the years, she was eventually driven to consider the possibility of a knee replacement, despite her young age.

“Even with painkillers I found walking difficult and avoided anything if it involved too much walking. I couldn’t sleep as I couldn’t straighten my leg in bed. I did try physio but that seemed to make it worse. I was left with no other option but taking Tramadol and I knew I wouldn’t be able to function normally. I couldn’t bear it any longer, and I didn’t want to rely on painkillers for ever,” recalls Leigh.

Fortunately for Leigh her employer allowed her to work from home if she needed to. But more importantly, Asda also provided private healthcare – and after Leigh found out she’d have to wait six months to see an NHS specialist, she contacted the provider who sent her a recommended list of consultants and she began to research her options.

“My dad had a knee replacement some years ago after an old rugby injury caused him problems. Now he doesn’t stop! So that gave me some confidence that I was choosing the right option,” said Leigh. But that didn’t stop her worrying about whether she was making the right decision to have surgery.

“I’d never had surgery before and I wasn’t sure it was the right thing to do at my age.”

One of the consultants on the list was Mr Ajit Shetty at Nuffield Health Leeds Hospital. Mr Shetty is a specialist hip and knee replacement surgeon, one of the earliest to start doing robotic-assisted hip replacements in the north of England.

At her initial consultation, Leigh wanted reassurance that a knee replacement was the right course of action for her.

“Mr Shetty could see I had tried other things and now replacement was really my only option. He said that as long as I looked after the new knee it should last 15 years and then we could always look at options after that. The main thing was that surgery would get rid of the pain and I would see an improvement in flexibility and movement.”

Mr Shetty said: “Chronic pain can be quite debilitating and it can cause patients to be constantly exhausted and stressed. I was able to see the detrimental effect of chronic pain on Leigh” 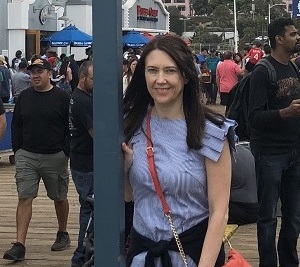 Having made the decision to go ahead with the surgery, Leigh said the Nuffield team were really lovely. “They helped to relax me. They explained everything. An anaesthetic worried me, but I had an epidural and was awake throughout the procedure so I was less worried.”

The pain that had driven Leigh to the point of despair disappeared as soon as she’d had surgery.

“I did still have pain after the operation, but it was a different sort of pain and after two to three weeks it started to settle down. After six weeks I was back at work.”

“My friends and work colleagues were amazed at the difference in me. They said I was like a different person, dashing about and walking much faster.”

One year on and Leigh hasn’t looked back. She’s had a busy year including a holiday of a lifetime.

“Now the pain is pretty much gone. But having had it for so long, there’s still a part of me that expects to feel pain when I stand up even now. It’s so much easier getting about. In fact, I went on holiday in the summer – a road trip in the US, including a visit to the Grand Canyon. I just couldn’t have done anything like that before.

“Even the scar doesn’t bother me – it’s better to have a scar than the pain! Every day I find that I can do more.

“Before the operation, if I ever saw stairs I thought OMG; it was so difficult to get up and down them with my bent knee, so slow and painful. Now I don’t give them a second thought.

“I’m so glad I had the surgery. It’s made such a difference. I certainly wouldn’t have done everything that I’ve done in the past 12 months! 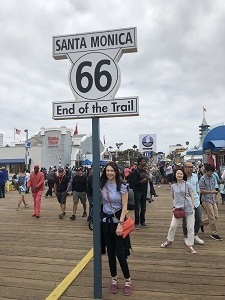 Leigh’s advice for others like her who may be suffering similar pain in their joints?

“Think about where you are now, the quality of life you have and what you could be doing if you have a replacement. There’s something that can be done about the pain. Live for the present – don’t think too much about the future.”

Mr Shetty said “Despite medical advances, rheumatoid arthritis can cause severe damage to the joints. Post knee replacement the change in Leigh was very obvious. With the severe chronic pain now gone Leigh attended postoperative consultations always very cheerful. I was delighted that the knee replacement made life lot easier for Leigh”.