A Harrogate teenager has described how her friends helped her recover from surgery to straighten her spine as she prepared to take her GCSEs – and how their end of year celebrations were extra special as they also marked her ‘spiniversary’.

Most teenagers struggle with the stress of their GCSE year, but Charlie Bennett, 15, had more than exam anxiety to deal with after undergoing surgery at Nuffield Health Leeds Hospital last June in the hope that she’d miss as little school as possible in the run-up to the important exams. Doctors diagnosed scoliosis in 2016 after Charlie's mum Laura noticed what looked like a crease under the teenager's bra-line.

“Charlie’s half-sister also had scoliosis so when she hit puberty and I noticed the crease, I knew straight away what it was,” recalls Laura.

Visits to a chiropractor, the family’s GP and then NHS specialists confirmed that Charlie had scoliosis, a curvature or bend of the spine which can cause severe pain in some cases.

The family decided it would be best to find a specialist who would perform the surgery privately once Charlie had stopped growing, so they could be in control of the timings.

Their NHS specialist recommended Consultant Orthopaedic Spinal Surgeon Mr Almas Khan, who specialises in the correction of scoliosis, and the family began to plan when would be the best time for Charlie’s operation.

“We knew we wanted Charlie to miss as little school as possible as she was in the middle of studying for her GCSEs. We thought the summer would be the best time, so she would have plenty of time to recover before returning to school in September,” explains Laura.

Unfortunately, Charlie’s plans to return to school in September were thwarted as she was laid low by glandular fever and became very anaemic; which is when her friends really stepped up to help.

“They went out of their way to support Charlie as she struggled with school. They’d come to meet her at home, carry her bags and do everything they could to make her feel as though she wasn’t missing out,” says Laura.

“They’ve really made everything easier for me,” says Charlie. “They truly are the best friends.”

Despite the setbacks, Charlie is glad she had the surgery last year. 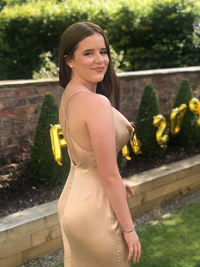 “It’s made me feel much better now I’m straight,” she says.

The successful outcome of the surgery was easy for everyone to see when Charlie celebrated her ‘spiniversary’ at the beach and then at her school prom when she looked stunning in a glamorous gold dress.

Consultant orthopaedic spinal surgeon Mr Almas Khan said: “Laura and Charlie came to see me a year beforehand, in order to organise her operation at a particular time. We monitored her for any unexpected progression and Charlie did very well from her operation. Most scoliosis patients require regular follow up until they are 18, so I am looking forward to seeing Charlie’s progress during this time.

Mum Laura said: “This has been the best year for Charlie to have the surgery. She’s been studying hard and so hasn’t missed being out and about or doing sporty activities. The timing has been perfect and now we’re looking forward to getting back to normal again.”