"The sinuses are air-filled outpouchings of the nasal cavity, covered by the same type of mucus-secreting lining as the nasal cavity itself. They fill the cheekbones (maxilla), the frontal bones of the skull, and the area of the skull between the eyes (ethmoid and sphenoid).

Sinuses drain their mucus into the nasal cavity, and from there into the back of the throat. The openings of the sinuses are only a few millimetres in diameter, and swelling of the lining of these openings can cause obstruction to this drainage. The mucus gets stuck in the sinus, can stagnate and lead to changes within the sinus that predispose to infections. 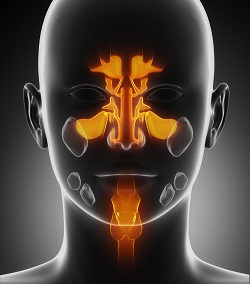 As a result of the blockage to the sinus drainage pathways, infection and inflammation within the sinuses can occur, leading to sinusitis. Acute rhinosinusitis occurs very quickly, a few days after a cold. If symptoms persist for longer than three months, this is termed chronic rhinosinusitis.

The main symptoms associated with sinus disorders are nasal congestion, a runny nose (sometimes watery, sometimes thick and discoloured), facial pain or headaches and changes in one’s sense of smell (hyposmia/anosmia).  Sometimes patients develop polyps in the nose and sinuses which can cause complete blockage.

The most effective sinus treatments are steroids into the nose. These usually come in the form of sprays, but higher strength drops can be used in some circumstances. Along with this, high volume salt-water irrigations are very useful. Rarely, oral steroids may be useful, particularly in patients with nasal polyps. Antibiotics are often prescribed for acute episodes of sinusitis, but it is unclear as to whether they benefit patients with chronic symptoms. Ultimately, patients with chronic rhinosinusitis who do not respond to the above measures may require surgery.

Sinus surgery has been carried for a long time, but has developed a lot over the years.  Now specially designed endoscopes are used to look inside the nasal cavity and sinuses and perform surgery in a manner that maintains the normal function of the sinuses (FESS). This has led to much better outcomes for patients and fewer complications." 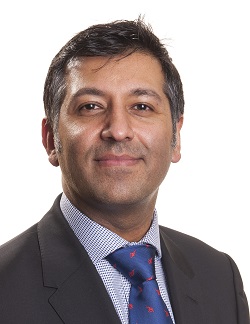 Mr Sanjay Verma is an experienced Consultant ENT surgeon at the Leeds Teaching Hospitals NHS Trust and Nuffield Leeds Hospital, where he has a dedicated adult and children’s ENT practise.  He specialises in ear, nose and sinus problems.  Over the last decade he has been instrumental in developing laser ear surgery, endoscopic sinus surgery and coblation tonsillectomy techniques in the region. Read more about: Mr Sanjay Verma.