What happens during a health assessment?

Overview
Back to top
Lifestyle Management Wellbeing at Work

Niki May Young Senior Content Producer for fitness and wellbeing
Niki May Young takes us through her 360+ Health Assessment experience, and the surprising discoveries that were made.

My husband calls it hypochondria, I call it acute physical intuition. Either way, I worry a lot and I almost always conclude the worst case scenario with little evidence to do so. So it was with great relish that I offered myself up to take a 360+ Health Assessment. ‘Ah ha!’ I thought, in pre-emptive glory, ‘I’ll show you I’m not paranoid, Husband!’ It would be a paradox that would secure my victory no matter the result – either there is nothing wrong with me at all (winner!) or there was something wrong with me after all (I was right all along!) 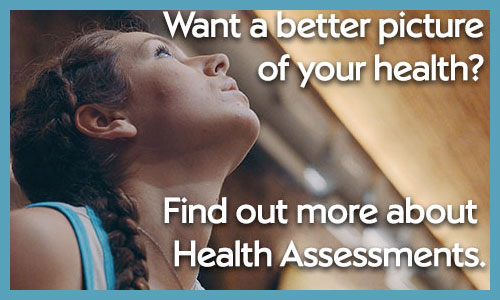 It took no time at all to book, my inevitable glory was allowed to proceed at pace when the delightful booking manager confirmed my appointment for the next Tuesday. ‘Next Tuesday,’ I thought, seeds of concern beginning to take root. The thought of a series of tests that could discover something sinister was, in truth, a daunting thought. While I knew in my heart of hearts that nothing awful was likely to come of the results, I couldn’t help but wonder ‘What if?’ I qualified the question with the inevitable answer that it’s better to know, and to know sooner rather than later.

I was due to get the full works. The 360+ health assessment is incredibly thorough including blood and urine analysis, spinal assessment, blood pressure, ECG, lung function, body fat analysis, breast check and smear (or prostate check and testicular examination for the gents). If by the end of this assessment I had discovered nothing concerning, then it was very likely there was nothing concerning to discover.

I had stacked up a basket worth of concerns in advance, nonetheless. These included a couple of raised moles, a lump in my breast (an ultrasound had already deemed it benign but it’s always worth keeping an eye on), my posture and back pain, which was recently exacerbated by lifting my not so little nephew a few weeks previous. I documented all of these, and a few more, in a thorough pre-assessment questionnaire that I was asked to complete as soon as possible before my appointment. While lengthy, I later learned how important this document is in gaining a true picture of my health, and in gathering family history.

So arrived the day. I managed to control my nerves – I am a grown up after all – but was particularly relieved to come across the familiar green shield on the door of the London-based clinic. As an employee of Nuffield I know how genuinely well trained, personable and expert the staff would be – I meet them every day and am in constant wonder at their knowledge. I was further reassured by the very welcoming staff member manning the reception desk who with a wide smile held out a lidded plastic cup and an envelope. ‘There is water next door and a bathroom upstairs,’ I was told.

With no messing around I had completed phase 1 of my assessment and returned to the waiting room for all of 30 seconds before my name was called. Scott would be my physiologist today, he advised, leading me into the examination room. My three-hour assessment would include an initial hour with Scott, who would take my blood, measure my height, weight, waist measurements, conduct my lung function test, take my ECG and take me through some of the results. Two vials of blood were taken and sent straight up to the in-house pathology lab to be tested along with my urine. I would get the results of both before even leaving the building.

Scott conducted the assessment in a professional and comforting manner, always reassuring me at the earliest point that my results were ‘in the desired range’ and explaining all of the tests thoroughly. I was particularly interested in the body composition test. I have long wondered how it is possible to tell what percentage body fat someone has without some sort of MRI scan or full body dissection. Very easily, as it turns out, by passing a very mild electric current through my body. The current then feeds back data on muscle, fat and water composition. I was relieved, though surprised, to find that my body fat was within a healthy range. My husband can add body dysmorphia to my array of symptoms then.

Once Scott had taken me through the various physical tests and apparatus to determine any areas of concerns or results that fell outside of the desired ranges, I was met with Anne, the doctor who would talk to me about any worries I had (she was in for a treat), conduct the breast exam and smear test and discuss some of the results from the previous tests.

Looking at my results two red flags were raised. The first was to do with my spine (I knew it!), the second to do with my waist measurement (this, I hadn’t foreseen).

A spinal assessment tool had been rolled down my spine, measuring its curvature. The results were conclusive: I had, in fact, very good posture. There were no misalignments in my back which formed the correct two curves. However, when asked to roll my body forward, head over toes, and conduct the same test, it was clear my spine was particularly inflexible – demonstrated aptly by a computer-generated representation of what could easily have been mistaken for an ironing board, but was in fact my spine failing spectacularly to curve. While not exactly life threatening, my assessment had highlighted an issue which, if left in this condition, could cause pain and discomfort and leave me more susceptible to injury (probably having resulted in my earlier back injury).

The waist measurement was, however, more worrying. While I’m a semi-comfortable size 12 who often jokes about her ‘food baby’, I hadn’t quite grasped that I was carrying quite as much weight around my belly as I am. Aside from the cosmetic issues associated with having a bit of a tum, body fat around the stomach is dangerous. Stomach fat is mostly visceral (under the skin) fat, the kind that surrounds the organs and can’t be grabbed with your hands. Visceral fat has been linked to metabolic disturbances and increased risk for cardiovascular disease and type 2 diabetes. In women, it is also associated with breast cancer and the need for gallbladder surgery.

After speaking with the doctor it was decided that increasing my cardiovascular exercise and joining a Pilates class would help to tackle both my unyielding spine, and my bulging waistline. Subsequent cardio tests conducted by Scott confirmed that I could do with a bit more blood-pumping cardio to improve the way my body deals with the stress of exercise.

So that was that. Having completed my assessment, a full digital report on its way, I left feeling surprisingly relieved. No drastic complications, nothing to worry too much about, but some lifestyle changes to take action on and goals set to help me on my way. My relief was undoubtedly seconded by my husband, who no longer had to bear the unending assertions that something was wrong with me. Don’t tell him I said ‘he was right’.