Blood-injury-needle phobia | The fight against fainting

Overview
Back to top
Heart and Lung Lifestyle Management Diagnostics

Chris Brunner Senior Content Producer for hospitals and clinical services at Nuffield Health
Does the sight of blood make the room spin? Here's how to fight back against blood-injury-needle phobia and pump up your resistance to fainting.

I’m inside the operating theatre as a patient undergoes a knee replacement. I lean in to get a closer look at the surgeon making his incision. He spreads the skin several inches wide and clamps it open with metal tongs, before shifting the knee cap westwards and exposing the gleaming white bone behind. There is a fluid, a shifting of the leg, a sudden smell. The room darkens around me. I stumble forward, regain my balance, and stumble again. Two colleagues take my arms as my legs give way and the scene collapses into a grainy blackness...

I’d fainted. It’s a rather embarrassing turn of events for someone charged with creating content for Nuffield Health’s hospitals. It was the first time I’d been inside the theatre during a - let’s call it "graphic" – procedure. While I have a history of feeling a little faint around needles, I certainly hadn’t expected to collapse in the middle of a crowded room, surrounded by people so irritatingly able to maintain their composure.

It turns out there’s a name for what I experienced, it’s called blood-injury-needle phobia. It’s called that because those are the three triggers likely to cause you to faint. You don’t even need to experience these things directly, it can be brought on simply by the anticipation of experiencing them. To realise I might have such a phobia was a rude shock, especially given my profession. But it turns out there is a way to keep my feet should I feel the walls closing in again. 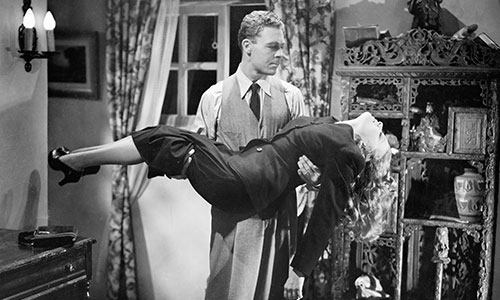 It’s argued that from an evolutionary standpoint, it makes sense to lower your blood pressure if you are injured or expect to be injured. In simplistic terms, if you see blood, there’s a good chance it’s yours and you’ll lose less blood and it will clot faster if blood pressure drops. But to reach your brain, blood has to fight against gravity. When your blood pressure dives, getting blood to your brain becomes more difficult and if it doesn’t get enough oxygenated blood you’ll faint.

Fainting brings your brain down to the blood, so most people who faint will quickly regain consciousness once they’re lying down, but by then you’ve made a fool of yourself and it’s already on YouTube. So here’s how to rage against the dying of the light.

The key is maintaining sufficient blood pressure to keep your brain fed with oxygenated blood if you’re in a situation involving any of your triggers. You can do this by tensing your large muscle groups including your abdomen, thighs, buttocks, shoulders and your arms. This should keep your blood pressure higher for longer, hopefully buying you enough time to find a seat or lie down. Feeling faint brings with it an urge to relax as you fight the panic in your heart, but relaxing is the last thing you want to do. Relaxing will make you pass out.

This is a hard trick to master, so some experts – including the nurses who helped me recover from my own episode – suggest exposure by degrees, a conditioning if you will, to the unpleasant sights that make you feel faint. To reassure me they told stories of their friends in nursing school who passed out during training, they learnt to control their blood pressure and ultimately their phobia.

As I lay in recovery, nursing my pride, I was asked if I'd had any lunch. The answer was no. The nurse shook his head, "can't do surgery on an empty stomach," he said. Low blood sugar and low blood volume is not an ideal physiological state to go into surgery with. If you're expecting to encounter one of your fainting triggers, go in with a full belly.

Despite the comedy of my own situation, fainting isn’t funny and can be dangerous if a person faints and falls near sharp objects or hard surfaces. If you notice that someone is about to faint (they’ve lost colour, balance, the ability to respond, their skin is clammy and their heart is racing), help to steady them and get them lying down in a safe place with their feet up so the blood can more easily return to their brain. If there’s oxygen gas available that will help too. There’s a tray full of surgical equipment I didn’t land in because the people around me realised what was about to happen and took the right steps.

You don't have to live your life avoiding these unpleasant sights fearing you'll pass out when the going gets tough. Tense up, condition yourself, prepare and maybe you'll keep your feet.

Simple test for a healthy heart

4 ways to stay calm during a blood test