Sam was never unhappy with her weight. Despite being 15 stone and living what she calls a sedentary life, she was always a happy person, with a loving husband and son.

But as she went on with her daily routine, passing a Nuffield Health gym every day when she took her four-year-old to nursery, something clicked.

“I just found it ridiculous that I was passing the gym every day but not going in. So I decided eventually that I would do something about it and enquired about membership.”

As part of her membership Sam was given her first of four Health MOTs when she joined. It raised a grave concern. With a BMI of 37, Sam was clinically obese, leaving her at risk of a wide range of health problems, including diabetes.

Sam had been on a number of fitness programmes before, but says exercise had always been a chore for her before joining Nuffield Health.

“My Personal Trainer had the results of my Health MOT and made an exercise programme that was very specific to me. She refreshes it regularly so I don’t get bored and has me trying things I would never have tried on my own. She’s helped me develop a love for exercise that has changed my life.”

Under guidance, Sam took small steps to start her fitness regime - swimming and walking on the treadmill. But one day she had an overwhelming desire to start running.

“I was on the treadmill and suddenly thought ‘just go for it’. It was hard at first, it hurt. But I knew it was making a difference and I could just feel the weight falling off,” she says of her first small victory. 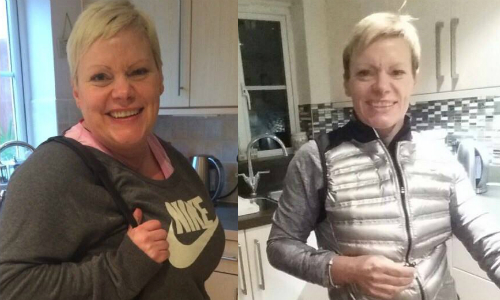 One year on and Sam is a different person, living a new life that she loves.

Sam’s BMI has reduced from 37 to 24, putting her firmly in the ‘healthy’ category. All of her other measurements from cholesterol to blood sugar are now healthy too.

An unexpected side effect for Sam has been the halt of a 20 year battle with alopecia (hair loss). “It’s cleared up completely,” she says. “I used to have bald patches and would cover them up with other bits of hair but one day I just realised I didn’t have any patches any more. My hair is thick and healthy.”

But, Sam says, the best consequence has been the shopping. “I used to hate clothes shopping because I knew nothing would fit. Now that I’ve lost so much weight I can shop in all of the designer stores. I won’t say how much money I’ve spent.”

Her love of fashion proved to be a strong motivator for Sam, whose husband promised her a new pair of Christian Louboutin shoes for every stone she lost. She now has six pairs sitting in her wardrobe.

5 ways to be happier and live longer