Damian Matich | The making of a transplant athlete

Overview
Back to top
Fitness Swimming Patient story
Damian Matich is aiming for four gold medals at the World Transplant Games this summer. Here he tells us about the circumstances that led to his participation in the Games and his desire to encourage organ donation.

On first meeting Damian Matich he gives off no inkling of the trials that he has endured. He is a charming man, full of spirit. He has a commanding presence and it comes as no surprise that he is a determined athlete.

We meet in the lobby of Nuffield Health Paddington Fitness & Wellbeing Gym, where he holds the esteemed title of Athlete in Residence. As we sit sipping water before filming Damian’s training session, he fills me in on the reason why he is now a part of Team GB and the cause he hopes to support through his sporting efforts.

Some 20 years ago Damian was diagnosed with a combination of rare conditions and given a 50/50 chance of seeing out the year. He beat the odds but continued to battle ill health, particularly with repeated liver-related illness. By 2012 Damian’s health deteriorated to the extent that he was assessed for a liver transplant and immediately put on the transplant list. He received his donor liver on 2 March 2012.

Now at 56 years old, Damian is joining a 100-strong group of Team GB athletes to compete at the World Transplant Games in Argentina in August 2015, his latest foray in competitive swimming.

“Before I had my transplant I went for a swim in January, I couldn’t do 10 metres and I thought, ‘What’s happening to me?’”

“There was an accelerated deterioration and I was just really trying to keep going. My family had to watch their father and husband just disintegrating. It’s a hell of a thing.

“At my first Transplant Games, held in Sheffield in August 2013, it had been a year and five months since my transplant. People say your first Games is quite an emotional event and I just thought, ok. But I remember I got up on the starting blocks and, well, it hit me just how lucky I was to be there. Then the buzzer sounded and I hit the water.

“My son said it was like seeing a big gorilla being thrown in the water compared to everyone else diving in beautifully, but I started flailing my arms furiously and I won the race, in quite a good time too. I’ll never forget that.”

Damian grew up in New Zealand. He was, he says, a 'small and runty boy' but came from a family where strength of character was very important. “My grandfather was from Croatia, on the Adriatic and supported his family from the age of 12. He migrated to New Zealand and built a life there. So there was this idea that you have to be strong, determined and overcome adversity that was with me from a very young age.”

Swimming is a sport Damian has enjoyed his whole life. Growing up on the west coast of New Zealand he learned to swim and body surf in the big waves of the ocean where it was literally sink or swim. Since then he has challenged himself continuously with open water and Channel swims in New Zealand. He was the first man to swim the Kaipara Harbour.

Having moved to the UK 17 years ago, Damian’s shift to competitive swimming is born of a desire to show his thanks to the country that made his recovery possible and highlight the need for organ donation.

“There is a gross shortage of donors worldwide and what everyone should be doing is thinking about opting in," he says. "An unknown person made a gift on their passing and that saved my life. I was terminal, with probably another two weeks to live. I’ll never know who that person is but they’ve given me another 20 – 30 years of life ahead of me, and that is incredible.”

‘My family is my team’

Joining Damian in Argentina will be his wife, son and daughter. From a beach house in Mar Del Plata, south of Buenos Aires, Damian’s family will be helping to document his progress. Damian’s family have been part of his team throughout his training and will be integral to his efforts during the Games.

“My daughter Sofija is very much my coach. My son Visko will be my camera man, and my wife Debra will be there as nutritionist, cooking up her fantastic food.

“It’s going to be a team event, they’ll be there and I want to bring home some success for them.”

With some emotion, Damian advises that he feels very lucky to have had the full support of his family, having survived the traumatic process of organ transplantation, the pressures of which often result in the break up of relationships. “As a society we need to start thinking about the impact of illness on the families. Without my family’s support I couldn’t do this. They were there for me when I was sick. They were there for me when I came right. And it’s been very difficult for us but we’re now starting to see the fruits of that.”

“Even though you have this marvelous gift you have to live within and accept constraints.”

Now well into his training for the Games Damian uses Nuffield Health facilities at Paddington, where he enters London for his work as a finance and technology consultant, and in Reading where he lives with his wife.

“It’s great for me to have the use of multiple facilities which mirror each other. The 20m pools allow me to focus on technique and also aerobic work. And having physiotherapists to hand is invaluable. Collette in the Paddington facility has been helping me through historical injuries I’ve had from rugby, karate and surfing. I’ve also had a 360 Health Assessment which has allowed me to benchmark my fitness against the general public and give me ideas to improve nutrition and mental focus.”

“You have days when you’re just not well. Even though you have this marvelous gift you have to live within constraints and you have to accept those constraints. And you can’t really push yourself. Before my transplant I could drive myself to extreme effort, I knew that my body could take it. I don’t have that luxury any more. But if you’re disciplined and if you’re focused, and with the support of organisations such as Nuffield Health you can achieve. So hopefully that’s what I’ll do.”

Find out more about organ donation at http://www.organdonation.nhs.uk

Special thanks to the team at the Tri20 Swim Centre for providing the use of their outdoor facilities for filming.

We are delighted to announce that Damian was tremendously successful at the 2015 World Transplant Games, coming away with two gold and two silver medals for Team GB:

Commenting on his experience Damian said: "The event has been quite inspirational. Complete strangers joined by a common 'Gift' from another human being giving them a second chance at life.

"The support from Nuffield Health was instrumental in my success and I give my thanks to you all and Elliott and Collette at the Paddington facility." 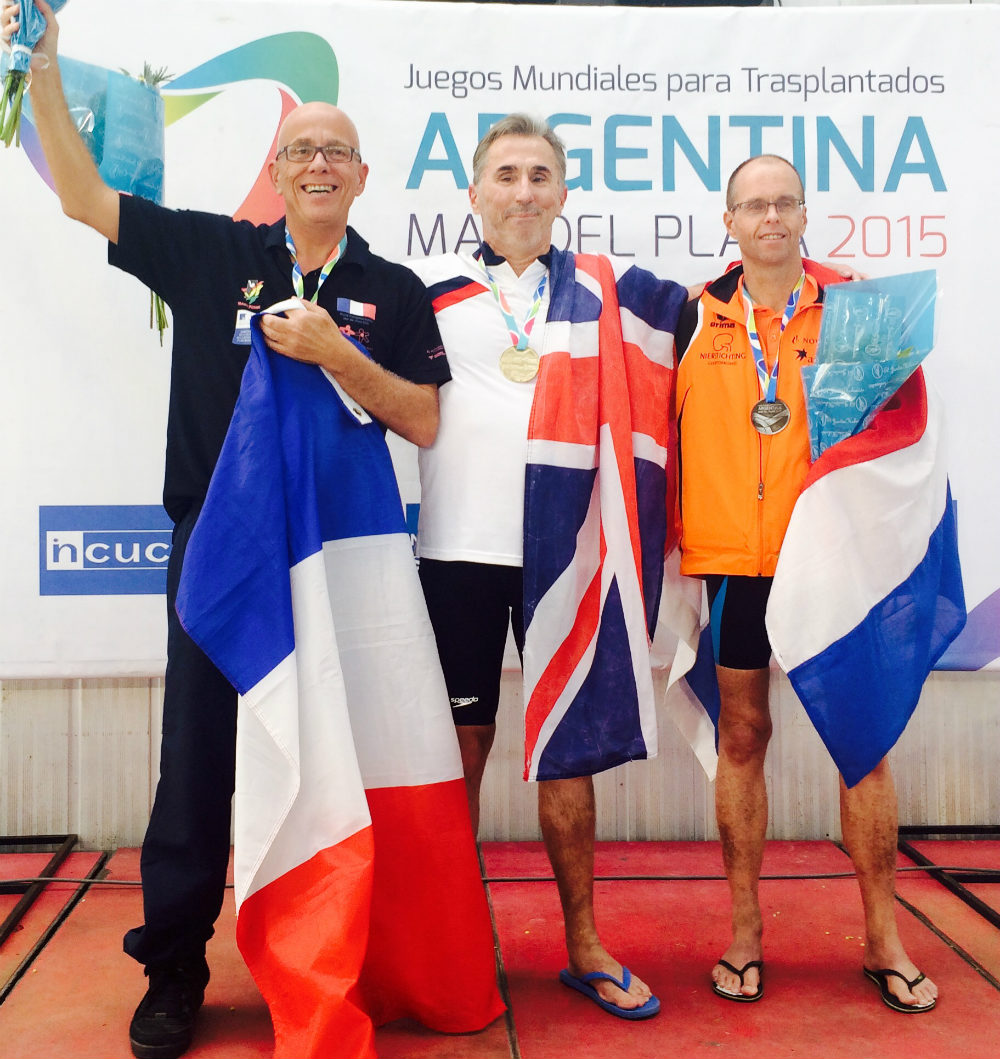 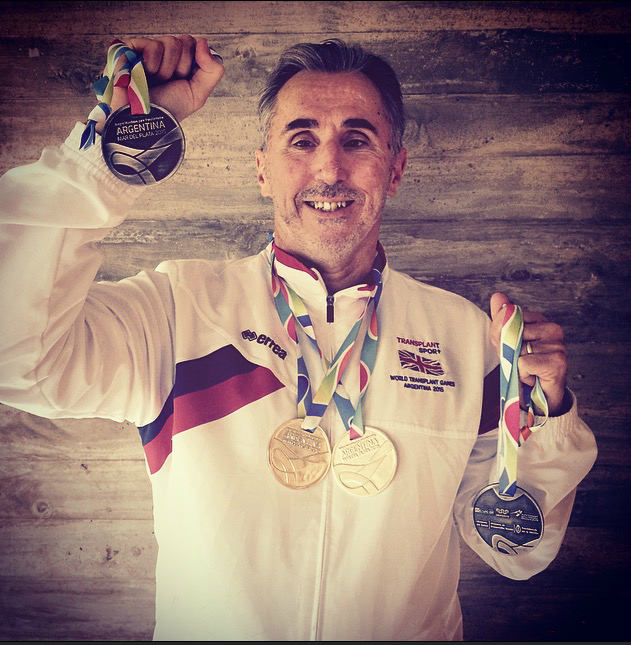 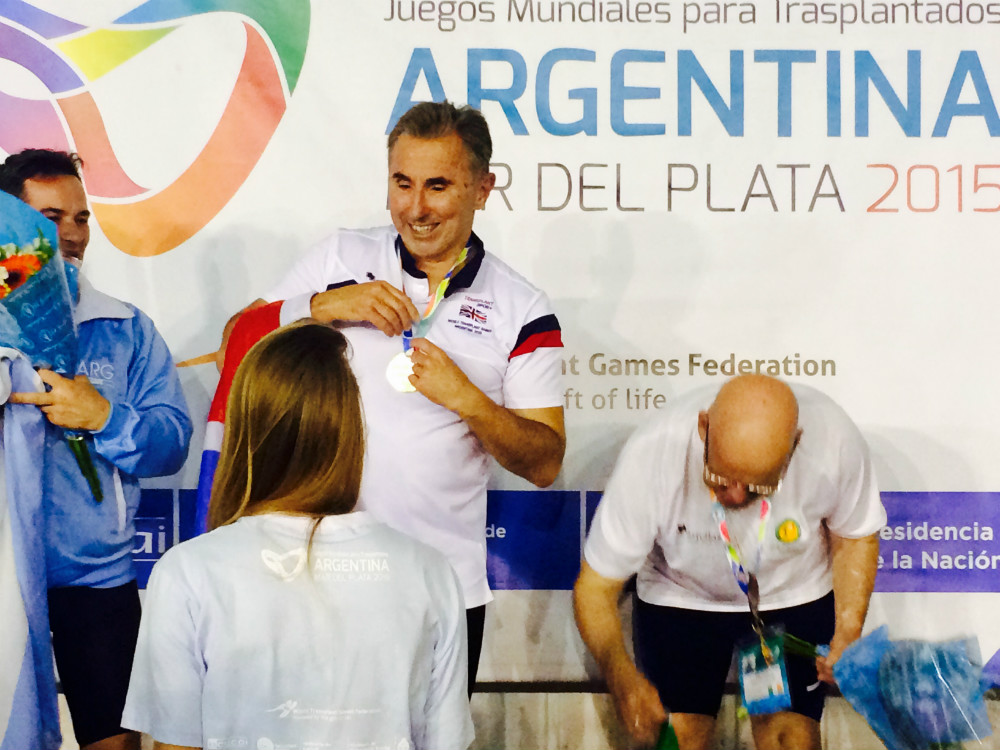 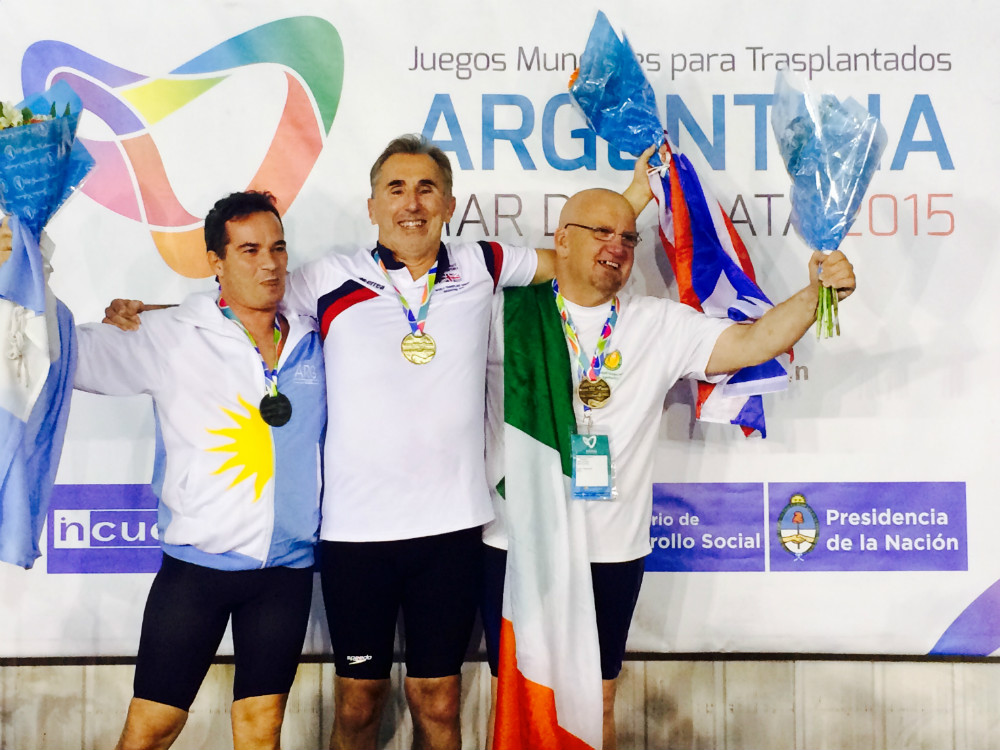