Overview
Back to top
Bones and Joints Nuffield Health News Hospitals Media Centre Patient story
Roz Mabey needed medical help to conquer severe hip pain that left her in tears. She now swims in the sea every day thanks to her life-changing surgery at Nuffield Health Vale Hospital. 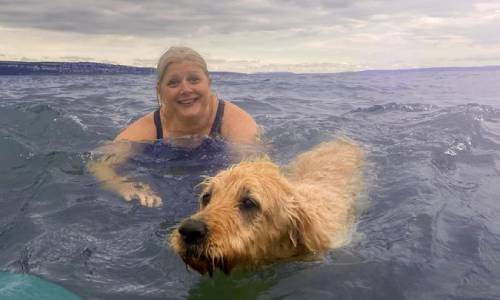 At not quite 50, Roz Mabey suffered severe pain in her hips trying to complete 10-hour shifts as a nurse in the minor injuries department at Neath Port Talbot Hospital.

After referring herself privately for physiotherapy earlier this year, she was recommended to get an opinion from consultant orthopaedic surgeon Phillip Thomas at Nuffield Health Cardiff and Vale Hospitals. Since then she’s enjoyed a whole new lease of life after having both hips replaced.

It was, says Roz, the best thing ever, and, not only has she taken up daily sea swimming, she and her husband have joined our Bridgend Fitness & Wellbeing Gym and are back to walking their dogs together. And helping her mum, who has a disability and who also lives with them, is a lot easier.

Roz has even had a career move and is now a development professional lead, working with young people who wish to pursue a career in healthcare for the Royal College of Nursing Prince of Wales Nursing Cadet Scheme. She’s also recently returned to university to complete her teaching certificate, replicating her two children who are also at university.

“I was feeling very down”

“For a period of about 18 months there was a slow creep of deterioration, which nosedived in December last year, and I knew then that something had to be done about my severe osteoarthritis,” explained Roz.

“My matron was very supportive and I had to take time off work as the pain was so bad. I was crying both day and night. My weight went up by two stones and I was feeling very down.”

Roz's GP said she was too young to be offered a hip replacement, but her physio suggested she get an opinion from a hip specialist. In January she had an X-ray and a consultation with Mr Thomas who said he’d be able to help.

“I liked his down-to-earth approach and he really gave me hope. He reassured me that I wasn’t the youngest patient he’d performed a hip replacement on and told me that the pain would go. He was so positive and optimistic, putting me at ease the whole time. His secretary Ginny was also very helpful and on hand.”

“The pain has gone and I feel like a new person”

Roz started the treatment process expecting just to have her worst hip replaced. However, her recovery and rehabilitation were hampered by the problems with her other hip, and it quickly became apparent that the sensible option was to replace the other one too.

“It was so worth it. The pain has gone and I feel like a new person. I’m now really well and the difference my two new hips have made is just amazing! I put on weight during the pandemic and I am really planning to lose that, now that I am able to be very active again,” Roz said.

“My experience at Nuffield Health Vale Hospital was outstanding. Despite being very busy with the huge demand for people going private, the nurses, the physios and even the cleaner seemed to have all the time in the world for me and nothing was too much trouble. They were just too lovely for words. I can’t recommend Nuffield Health enough. Nurses usually make the worst patients, but they were very patient with me.

“I am so grateful to my family, who rallied around to help with the costs of the first hip in March and, for the second one in June, I approached St Bartholomew's Hospital in London where I trained. They have a benevolent fund for nurses who need assistance. It has worked out so well for me. I am just thrilled.”

“We are treating more and more younger patients”

Roz's surgeon Mr Thomas said it was a pleasure to treat her: “She has done really well, despite the setback of having to have the second hip replaced as well.

“Her physios say she is really motivated to do well and she’ll be having a handover to the trainers at her local Nuffield Health gym to keep up the good work.”

He also revealed that the age range of patients was widening. “We are treating more and more younger patients so that they can get back to having active lives and being able to enjoy full mobility,” said Mr Thomas.